HomeCelebrating Bayard Rustin
A- A A+ 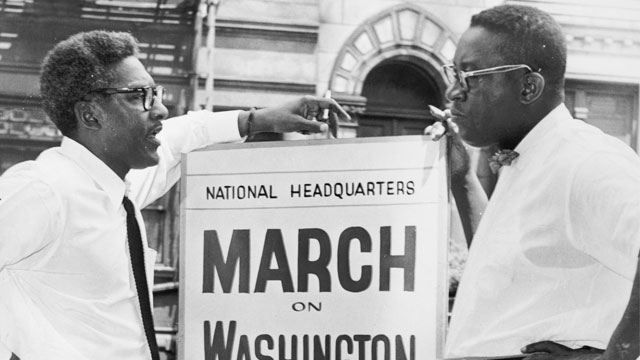 At YWCA Greater Cleveland, we believe that understanding our collective, complete history is the first step in the cycle of action that ideally produces racial equity. As you read this post, the efforts to suppress or limit the teaching of this history–and more specifically the legacies of racism and sexism in the United States–are well underway. As of June 18, 25 states have introduced legislation that would “restrict teaching critical race theory or limit how teachers can discuss racism and sexism, according to an Education Week analysis.” Eight states have succeeded in enacting such history bans. In light of these efforts (which are also underway in Ohio), now is the time for truth-telling.

In honor of Pride Month, we have chosen to highlight Bayard Rustin, civil rights leader, the pioneer behind the 1963 March on Washington, and an openly gay man. Rustin is one of innumerable examples of historical figures whose stories are not widely known because of intentional efforts to suppress the contributions and achievements of LGBTQ+ people.

A student of Mahatma Gandhi’s nonviolent resistance, Rustin played a critical role in introducing these teachings to Dr. Martin Luther King, Jr. during the Montgomery Bus Boycott in 1956. Despite his close relationship with Dr. King, Rustin still experienced intense homophobia. One particularly searing moment came in 1960, when Rep. Adam Clayton Powell Jr. of New York warned Dr. King that if he did not distance himself from Rustin in his planning of a protest outside of the Democratic National Convention in Los Angeles, Powell would tell the press Dr. King and Rustin were “gay lovers.” Fearing irreparable damage to the movement, Dr. King caved to the pressure, which resulted in the march being called off and the resignation of Rustin from the Southern Christian Leadership Conference (SCLC, which he had organized with Dr. King in 1957).

After a few years of organizing outside of the SCLC orbit, Rustin began working with A. Philip Randolph–who had originally introduced Rustin to Dr. King in 1956–in 1962 to organize a march to commemorate the centennial of the signing of the Emancipation Proclamation. Once again, Rustin encountered internal opposition to his leadership, this time from Roy Wilkins of the NAACP who refused to allow “a person of his liabilities at the head” of the march. As a result, Randolph became the march director, and Rustin became his deputy. As deputy, Rustin became the principal architect of the March on Washington, including authoring the Organizing Manual that provided instructions for marchers and other organizers alike.

Following the March, Rustin continued his pursuit of justice, but with a renewed focus on the LGBTQ+ community. In the 1980s, he advocated for the AIDS crisis to become a larger focus of the NAACP. Rustin believed that it was now his obligation to advocate for others like himself. As he remarked in a 1987 interview with the Village Voice: “I think the gay community has a moral obligation…to do whatever is possible to encourage more and more gays to come out of the closet.”

While Rustin passed away on August 24, 1987, the legacy of his organizing–both the March on Washington and his LGBTQ+ activism–lives on in the present. In 2013, President Barack Obama posthumously awarded Rustin the Presidential Medal of Freedom. While such recognition is both important and well-deserved, we must also consider why Rustin faced such discrimination and why his story is less well-known than his celebrated contemporaries. The intersection of his race and sexual orientation compounded the barriers he faced, as the numerous instances of discrimination from those within the Civil Rights Movement demonstrated. Rustin’s life powerfully demonstrates why the contemporary debate about history is so critical; the stories that don’t get told are just as significant as those that do.

Thus, we must strongly oppose these efforts to restrict what can be taught in schools, otherwise, the histories of other LGBTQ+ activists and those who believe in racial equity and justice will be lost.

To hear more about Bayard Rustin and his impact on the Civil Rights Movement, listen to this podcast episode from NPR’s Throughline.